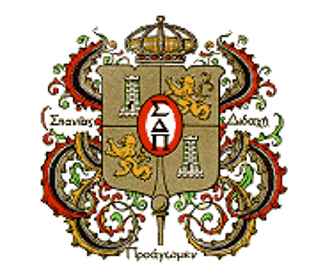 Founded at the University of California Berkeley on November 14, 1919 by a graduate student named Ruth Barnes, Sigma Delta Pi, La Sociedad Nacional Honoraria Hispánica/National Collegiate Hispanic Honor Society, is the largest foreign language honor society for college students in the U.S. with nearly 600 chapters nationwide. The Society's insignia is the Spanish royal seal of Fernando and Isabel, representing Castille, León and Aragón; its colors are red and yellow gold, its flower is the red carnation, and its motto is the Greek phrase "Spanías Didagéi Proágomen" meaning "Let's go/continue forth under the teaching/guidance of the Spanish language."

The 2018-19 initiation of new members will take place in the spring semester (TBA). To apply for membership, please contact the Students Chapter Officers to receive the application.

Print out a PDF version of this information here.