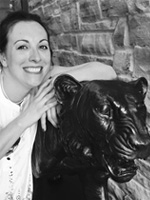 Holly Villines is a PhD candidate in the department of Modern Foreign Languages and Literatures, with a concentration in Spanish literature. Her research focuses on the representation of the Modern Woman in novels of early twentieth-century and Interwar-era Spain. Holly earned her Bachelor of Arts in Print Journalism from the University of Missouri-Columbia and her Master of Arts in Spanish at Southern Illinois University. At the University of Tennessee and at Southern Illinois University, Holly has taught courses in lower and intermediate-level Spanish and in Spanish conversation. She has contributed to study abroad programs, including recruitment and mediation for Face the World Foundation in Carbondale, IL and working as assistant program leader and graduate teaching associate in Alicante, Spain for the University of Tennessee.
As the former editor-in-chief of Vernacular: New Connections in Language, Literature, & Culture —the academic journal organized by graduate students in the department of Modern Foreign Languages and Literatures at the University of Tennessee—Holly continues her interest in editing, research, and writing. She has also worked as interpreter and translator for various publications and organizations, including Jupiter Entertainment and Arkansas Spanish Interpreters and Translators.

Holly is dedicated to advocacy of civil rights, and she has served as Spanish-English interpreter for asylum seekers through Knoxville Immigrant Transit Assistance. She organized two symposiums for Vernacular and the department of Modern Foreign Languages and Literatures. The theme and keynote discussion panel that Holly chose for the 2020 symposium was “I’M-MIGRATION: U.S. Migration and Borders.” In Little Rock, Holly served as an ESL and English-literacy tutor for AmeriCorps with Literacy Action of Central Arkansas.