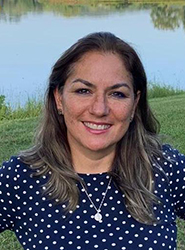 Rossy Toledo, MFA was born and raised in Mexico City. She graduated from the University of Texas at Austin in 1994 with a B.S. in Communications. She worked in advertising and media for 13 years, including radio and TV advertising production, print design, and publishing. She started teaching Spanish for the MFLL at the University of Tennessee after graduating with an M.A. in Spanish in 2002. Her passion for marketing, advertising, and the media world continues. For this reason, she designed a specialized Intermediate Spanish Course for Communications Majors: Journalism, Advertising, and Public Relations, where her students get involved in service-learning projects. Toledo earned a Teaching Innovation award in 2017 for the project Recording the Lives of East Tennessee Immigrants, where Spanish Honor Students work with community members to record their life stories through StoryCorps.

Since 2010, Toledo pioneered the world of Virtual Teaching for the University of Tennessee designing and implementing Intermediate Spanish Online. She is currently a Technology Enhanced Teaching Faculty Fellow and thus helps advance the University’s mission in online teaching.

Toledo finished an MFA in creative writing from NYU (May 2012) with her creative dissertation Pregonero Despertar de Voces published by Abismos in April 2013. Her second poetry collection, Azules Sueños Naranja was published in August 2013 by miCielo. In May 2015 she coedited an Anthology of Bilingual-Bicultural texts Nos pasamos de la Raya/We crossed the line. Toledo is currently working on her third poetry collection Vacíos/Emptiness, and on the Second Volume of Nos pasamos de la raya/We Crossed the Line. Her research interests include Gender Studies, Hispanic Cinema, Cultural Competency, and Service and Experiential Learning.