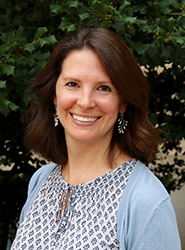 Mia Romano is a native northern Californian and is joining UTK as a Spanish Lecturer. She completed her undergraduate degrees in Spanish, English, and Art at Wagner College in New York and then completed a Master’s Program in Hispanic Literatures and Cultures through New York University in Madrid. She then attended Rutgers University in New Jersey and completed her PhD in 2015, entitled “Excessive Femininity as Resistance in 20th and 21st Century Mexican Narrative and Visual Art”. Mia has been teaching Spanish grammar, conversation, composition, and literature since 2008. She was a TA at Rutgers for four years, an Assistant Instructor at Rutgers Newark for a year, and taught for three years at Bard High School Early College in Newark. In her spare time, she enjoys cooking and traveling.