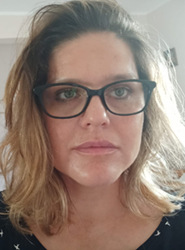 Margarita is originally from Guatemala. She is a Lecturer of Spanish at the Department of MFLL. She holds a Ph.D.  in Hispanic Studies, with a second concentration in Applied Linguistics. She holds two master’s degrees. The first is in Spanish-American Literature from Universidad Rafael Landívar (Guatemala), and the second is in Hispanic Lexicography from the prestigious program of the Real Academia Española (RAE), the Asociación de Academias de la Lengua Española (ASALE) and Universidad de León (Spain). Margarita holds a Licenciate Degree in Language and Literary Education (Summa cum laude) awarded by Universidad Francisco Marroquín (Guatemala). She received a fellowship from Fundación Carolina (2010-2011) to conduct lexicography studies in Madrid, Spain, at the graduate level. For the period 2011-2013, she received the fellowship MAEC-AECID to conduct research and lexicography work at the Academia Guatemalteca de la Lengua, correspondent in Guatemala to the Real Academia Española.

In linguistics, Margarita has participated in joint projects between the RAE and ASALE related to phonetics, orthography and corpus linguistics. As a lexicographer her experience includes a collaboration in the new edition of the Diccionario de la lengua española, known as DLE (RAE-ASALE, 2014), considered by Spanish speakers as the authoritative and normative dictionary of Spanish Language, and a project to coordinate the contents of two leading Spanish dictionaries: Diccionario de Americanismos (DA) (RAE-ASALE, 2010) and the DRAE (2001).

She has published several works of literary criticism in books and in journals. Her current research interests include Nineteenth-Century Guatemalan Lexicography and late Nineteenth-Century Spanish-American literature, specifically the writings of the Guatemalan modernista author Enrique Gómez Carrillo (Guatemala, 1873- Paris, 1927) as they relate to impressionist painting, impressionistic criticism, and empiricist philosophy.

In her spare time, she likes to swim and spend time with her family.