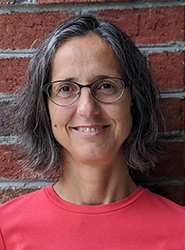 Nieves González Fuentes is a native of the Basque Country (North of Spain). She attended the University of the Basque Country, earning her 5-year BA in Journalism with a specialization in Advertising. After working in her area of expertise for over 10 years, she decided to pursue a new professional path in academics. González Fuentes started working as a translator and as an interpreter in the medical field. Then, she came to North Carolina where she obtained a BA in Hispanic Studies at East Carolina University. Right after earning her B.A., she attended North Carolina State University supported by a Teaching Assistantship that allowed her to teach introductory Spanish courses. At this institution, she received a MA in Spanish. Concurrently, González Fuentes participated in research projects regarding the Hispanic community as well. Her Master ’s final project “Españolas, Franco ha muerto: La mujer en la Transción a través de Vindicación Feminista” shows her early interest in recovering the voice and contributions of women to the history and culture in Spain. Right this achievement, González Fuentes worked as a lecturer at East Carolina University for a year. Following her research interest and her love for teaching, she attended North Carolina University at Chapel Hill to obtain her PhD in Romance Languages and Literatures. At this institution, with a Graduate Teaching Assistantship, she taught introductory, intermediate and advance Spanish language courses along with Spanish for the Medical Professions. During her academic education, González Fuentes discovered her passion for teaching Spanish as a way to open her students’ minds, show them other cultures and develop in them a critical thinking. Currently, she is working on a book project focused on a Spanish film maker named Cecilia Bartolome who subverted the Spanish women stereotype represented by the hegemonic cinema industry during the Spanish Transition while teaching intermediate Spanish at UT. In her spare time, she enjoys spending time with her friends, going to the movies and exercising.